Patients come to UF&Shands for a variety of reasons, and many face the same problem as Hunter Dandurand — a rare disease few have ever heard of, let alone understand how to treat. In this issue of The POST, we take you inside Hunter’s life with the uncommon and painful condition epidermolysis bullosa. 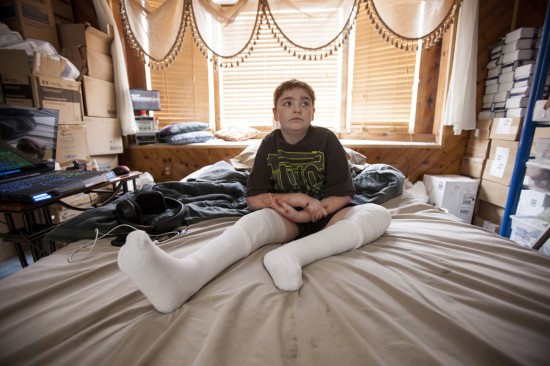 Hunter lives in Crystal River, Fla., and now comes to UF&Shands, the UF Academic Health Center, for his care. Kimberly Merkel, M.D., an assistant professor of dermatology in the UF College of Medicine, monitors the condition of Hunter’s skin and provides Hunter with necessary resources.

Hunter received a referral to see Merkel in the fall of 2011. Merkel says Hunter and his parents were skeptical to see her because many physicians aren’t aware of EB, but they quickly bonded.

Merkel works with several children who have EB. She became interested in the rare disease in September 2011 when an infant with EB was transferred to Shands at UF. As the on-call dermatologist, she was called in to work with the baby.

“The parents and family really needed someone who could come in and provide them with treatments and resources, because it’s a devastating thing to have your child born with EB and feel helpless,” she says.

Merkel began to research EB to learn as much about the disease as she could. At that point, UF experts were not well-versed on the disease, so Merkel began acting as a liaison between her patients and other doctors or resources that she knew could help them.

“Patients with EB have usually gone through this disease alone,” she says.

Hunter gets blisters as often as three or four times a week to three or four times a month. The blisters occur all over his body: legs, arms, hands, throat and even his eyelids. People who are born with EB lack the proteins needed to anchor the layers of skin together, and the epidermis, or outer layer of skin, easily breaks and blisters. They’re often called “butterfly children” because of their skin’s fragility. Read more.