It was 1965, just a year after the landmark Civil Rights Act outlawing racial segregation, and Dr. George Cohen was an adolescent learning about sunscreen for the first time — when, at the beach, a white girl asked him to rub some on her back. 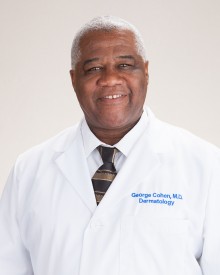 “I didn’t know what sunscreen was, and I’d never touched a white girl,” Cohen told an audience Thursday night at the University of Florida Springhill Health Center’s dermatology department.

What Cohen, a dermatologist with the clinic, also didn’t know back then is that he should have been wearing sunscreen, too.

A common misconception that still persists is that African Americans, because of their darker skin pigmentation, don’t need to wear sunscreen and are immune to skin cancer.

Cohen’s talk Thursday was dedicated to skin issues in African Americans, which have been overlooked, Cohen said.

“Many dermatologists in America did not receive formal training” in treating typical skin conditions in African Americans, Cohen said, adding that their textbooks don’t have a lot of pictures of the conditions.

There’s also been a dearth of research on these conditions, Cohen added. Keloids, for example, are abnormally large scars that are 16 percent more prevalent in African Americans than Caucasians.

Sarcoidosis, clumps of abnormal tissue growth that can be disfiguring, is also not unusual in the black population, Cohen said.

He said that melanoma can appear on the hands and feet — Reggae legend Bob Marley in fact died of a melanoma that started on his foot but was caught too late to be successfully treated.