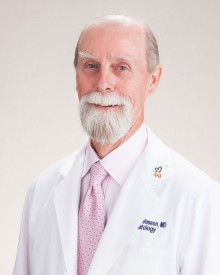 It is with great sadness for the Department of Dermatology to announce the passing of Stanton Wesson, M.D., on October 25, 2022. Dr. Wesson joined the University of Florida in 2000 and was an instrumental pioneer for the division/department for 18 years, providing amazing patient care along with training countless medical students and residents that have passed through the program. He will always be remembered as a pioneer at the University of Florida Department of Dermatology.

He believed he made his most significant contribution to patients by maintaining an active patient care practice throughout his Navy and University of Florida career, which always included educating medical learners and making medical students, residents and fellows active participants in the care of patients. In this practice, he always tried to provide a “physician model” to learners worthy of the trust his patients placed in him. He also contributed to the education of students, residents, fellows and colleagues by presenting many topics in medicine and dermatology, including through medical student courses, local and regional meetings and guest presentations at other institutions.

Dr. Wesson was born in Birmingham, Alabama, but grew up in Bethesda, Maryland. He had high aspirations of becoming a physician as a child, but his path to medicine was untraditional. After graduating from high school during the Vietnam War, he received his call to service, joined the Army and was trained as a helicopter pilot, completing a tour in Vietnam from 1969-70. He was released to the Army Reserve in December 1970 and began his college education in 1971. During the next five years, he worked his way through his undergraduate studies, got married and was selected to join the charter class of the Uniformed Services University of the Health Sciences School of Medicine, which began his career as a medical officer in the U.S. Navy. In 1986, he completed his dermatology residency training at the Naval Hospital in Bethesda, Maryland.

He believed his inclination to serve was given form during his years in the military, and upon retiring from Naval service in 2000, he joined the UF faculty. He found a true sense of satisfaction in his efforts to continue to share the calling as a physician with others who had those same aspirations at UF.